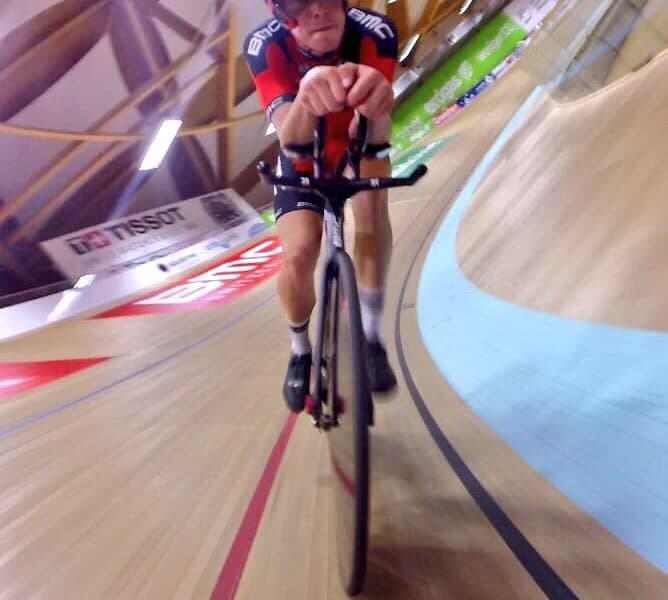 At APEX Coaching, we’ve been using the LEOMO Type-R to help our athletes monitor and refine their TT position. Interestingly, much of what I’ve been doing lately is less about changing the fit dimensions of the bike but focusing instead on posture and how the athlete is sitting and moving while they pedal. It is essential, though, to start with an appropriate fit on your bike in the TT position. As most people are familiar with the importance of proper bike fit, I’m not going to go into detail regarding fit. It is important to note that one can not simply “move” their fit data from a road bike position and rotate things forward and be in a proper aerodynamic and powerful time trial or triathlon position. There are many differences to consider, and if you’re interested – here’s a link to post that I wrote about using the LEOMO Type-R to assess impacts of position changes on power output and performance in the TT position. https://apexcoachingco.com/blog/apex-july-blog-leomo-obsession-in-motion/

This post is going to focus on evaluating changes in motion and LEOMO MPIs through modifications of body posture without any changes to the bike position or set-up. The photo above is of Rohan Dennis in the days prior to him setting the UCI World Hour Record of 52.491 meters in February of 2015. The thing that sticks out to me is how narrow Rohan’s shoulders are. This is not an accident, and Rohan has spent many hours in the wind tunnel testing and racing on the velodrome to find a position that allows him to produce power while holding a very aerodynamic position with minimal drag. As we sometimes say, narrow is aero.

In March of this year, I had some meetings in Australia and had the chance to work with an athlete who I have been coaching remotely for about four months. This athlete, Jack, was preparing for his first ever time trial race at the Oceania junior road and time trial championships in Hobart, AUS. We set-up Jack on his TT bike on a stationary trainer in the basement of the house we were renting to look at his position. We placed the Type-R sensors on Jack including using both the core and torso sensors to measure his motion and position. Below are two pictures representing Jack’s “natural” position on the TT bike on the left, then shrugging his shoulders on the right. As you can see, there’s a dramatic decrease in the frontal surface area exposed to the wind with his shoulders shrugged (right).

APEX Coaching coach Mac Cassin, who is a USA Cycling elite national champion on the track and a member of the USA Cycling elite men’s team pursuit squad, assisted me in helping Jack use the Type-R to show him his MPIs and how that related to what we were able to see visually.

The next area that we focused on was looking head position with his helmet on while shrugging, as well as looking at the transition of the helmet to his back to try and get a smooth transition which should reduce pressure drag.

The photo on the left shows Jack’s “natural” position while focused only on shrugging his shoulders.  The photo on the right is what happens when we asked Jack to drop his chin towards his forearms while maintaining the shoulder shrug. As you can see the gap between his upper back and the tail of his helmet is gone even though the relative angle of his helmet remains the same. Note: we did not make any changes to the bicycle during the entire session.

The two photos below also show the “natural” shrug position versus the shrugged position combined with the chin drop.  By looking at this two positions head on we get a better idea of the change in his frontal surface area, one of the most critical factors in aerodynamic drag.  All of these improvements were achieved through monitoring and cuing changes in position, not by changing anything on the bike.

Impact of Shrug and Turtle

The next day, we rode outside in wind and rain for about 90-minutes before returning indoors to have Jack perform three high-intensity intervals. The first effort was 4-minutes just below his FTP. The 2nd effort was 3.5 minutes just above FTP, and the 3rd effort was 3-minutes long, just below FTP but at a very high cadence (>110 RPM). The goal for these three efforts was to determine if Jack was capable of maintaining this new position while still putting out relatively high power. Afterall, an incredibly aerodynamic position is useless if the rider is no longer able to produce power

The results of the 3 efforts are shown below from the LEOMO dashboard.

In reviewing Jack’s LEOMO Type-R MPI data, it is clear that he was able to maintain his position, especially regarding his pelvic and torso angles, throughout the intervals. Unfortunately, we didn’t get data for left foot or thigh angle due to misplacing a sensor before travel. The relatively low DSS from the right foot data partially demonstrated that Jack had a relatively smooth pedal stroke while in the TT position. Jack’s average pelvic angle varied by less than 3 degrees from the 1st to 3rd effort, while his pelvic rock and pelvic rotation varied by only 0.8 and 1.2 degrees, respectively. This indicates good core stability and excellent stability in the saddle. Reviewing the torso data showed an even better capacity for Jack to maintain a calm upper body position with an aggressive torso angle varying between just 3.2 to 3.9 degrees on average between the three intervals, and only a 0.2 degree difference in average torso rotation between the three trials. The most significant observed difference of 1.5 degrees was in torso rock (from 5.4 to 6.9 degrees) occurring between the 1st effort (lower cadence) to the 3rd effort (high cadence). Knowing that Jack had only been riding the time trial bike for approximately 4-weeks, I was pleased to see such stability.

In summary, the use of the LEOMO Type-R allowed us to be able to help provide posture and TT position measurement and monitoring both in the controlled indoor trainer setting during position evaluation and to monitor the ability to maintain the goal posture during subsequent intervals the following day. Had the weather been agreeable, we would have performed the intervals outdoors – but you don’t always get to perform training sessions and evaluate in the perfect conditions. The Type-R allowed us to be adaptable in our work and provide concrete goals to positively impact performance. And for those wondering how the Oceania TT went – Jack averaged 43.9 km/hr over the 26.8km long course (in junior gears – a maximum of 52 X 14) placing 22nd in his first ever time trial. Not a bad start!

We are now offering limited 12-Week Training Plans for the holiday season! The Basic, Mid and Level-up tiers offer different engagement and price points to adjust the plan to your liking. Purchase for yourself, or as a gift to be used any time over the next 12 months!